Posted by pablodsz in IS: Infinite Stratos on January 28, 2011

This is something I wish didn’t get cut out from the anime, it makes Chifuyu look a lot more concerned and likeable.

Scans are on Mangafox.

Posted by pablodsz in IS: Infinite Stratos on January 28, 2011

Yeeeaah a full episode of CG battles and tsundere childhood friends. The fight versus Rin was interrupted by an unknown type of unmanned suit that came crashing down on the party, They defeated it but Ichika was left unconscious in the nurse’s office bed, waking up to prevent poor Rin to steal a kiss. In my opinion he really sucked in this fight, he didn’t show all the reflexes he showed when fighting Cecilia and got hit one too many times, not mention Rin had to beam him  and power him up for him to actually damage the baddie buuut no, he still didn’t kill him. How did he kill him? ramming head first into his deadly laser, that’s how.

The CG were good and fluid, and most of the dialogue in the episode wasn’t crap. It was surprising to see Chifuyu pouring salt instead of sugar into her coffee by accident during Ichika & Rin’s battle against the baddie, now I see she’s not an uncaring bitch of a sister like a certain imouto character.

Finally, notice the reverse trap in the preview, that looks promising.

IS: Infinite Stratos 03 – Get Kicked by a Horse and Die?

Posted by pablodsz in IS: Infinite Stratos on January 20, 2011

This week’s episode was great, Cecilia turned Dere overnight but I’m Ok with that now. Not surprisingly Orimura got the class pres position anyway, and his Chinese childhood friend transferred in: Twin tail fang-tan. So she  got into arguments with other members of the harem right away following the usual jealous girl pattern, it was great.

I’d be lying if I say I didn’t write this short post as an excuse to post this cap.

So episode ended with Orimura vs Rin, and we all know how that gonna end up.

Posted by pablodsz in IS: Infinite Stratos on January 14, 2011

Here’s what happened following from episode 01, the blonde british girl and Orimura fight and after some battle scenes (those better than expected) he lost, but only because his sword basically traded life points for attack points and he ended up killing himself. Now noting the fact the He is an amateur fighting someone who’s representing  England he did pretty good, but that’s not the issue here though, what really mattered  (yes, everyone saw it coming a mile away) is that she has the hots for him now, and I don’t know about anyone else but I found that so cliché, I mean that’s just not how it would go in real life. Sure she’d be closer and more friendlier in a manner of ways but not muttering-his-name-while-showering kind of close.

Other stuff that happened in the episode is that he raised some points with his childhood friend.

Posted by pablodsz in Uncategorized on January 8, 2011

The Mahou Shojou show of this season, Madoka Magica, so far is alright, I didn’t think much of it since this was somewhat off putting after all that hype, maybe I expected some magical girl action right off the bat, either way it didn’t leave such a strong Impression on me.

Everything starts off as Madoka dreams about a weird world in which she meets Kyubey, that little cat thing, who offers her the oportunity of signing a contract to be a magical girl, and Homura Akemi, a magical girl who is in peril and wounded. After she wakes up we get a glimpse of Madoka’s everyday mornings, her  friends, school and class (This was boring for me) etc. She then finds out the girl who she saw in the dream transfered into her school and apparently it wasn’t just a dream seeing as she’s a bit hostile (What is her problem?) for no reason.

Later during a visit to a record store she listens to a voice in her head calling for help, she follows it to some weird room with awful lighting and finds out it’s that wounded cat thing thats running away from Homura in magical girl modo who apparently is trying to kill said cat thing. Madoka is rescued by Sayaka (Green haired classmate) who grabbed a fire extinguisher and showered the place making a distraction. As Homura gives chase everyone starts having this weird acid trip like a Sayonara Zetsubou Sensei OP just started playing in the background.

Long story short blonde magical girl with Unlimited Revolver Works saves the pair and the cat, chases off Homura and heals the cat thing. And so the episode ends with Kyubey making that proposal again, this time to both Madoka and Sayaka.

IS: Infinite Stratos 01 – She will need that Handicap

Posted by pablodsz in IS: Infinite Stratos on January 7, 2011 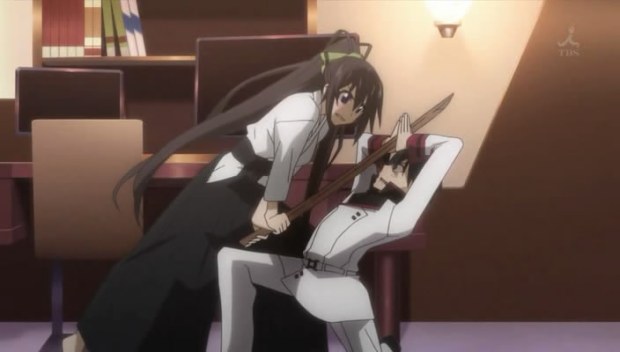 For my first taste of Winter 2011 season this left me so hyped. So Infinite Stratos is about Orimura Ichika, the only male that’s able to ride the mobile armors that the show is about (Maybe because the suit penetrates you or something) and since the setting is the mandatory girls-only high school with dorms, embarrassing situations galore.

So for a first episode this was great, promising characters and decent quality that I hope lasts, not to mention the mecha scenes weren’t  half-assed. It worries me that studios normally make the extra effort to make a first episode that makes an excellent first impression and then go down-hill after they secure a somewhat ample fanbase, but so far no weird proportions or four fingered hands anywhere.

As for the characters so far we got the childhood friend, the blonde Ojou-Sama (F**k Yes), the Onee-san homeroom teacher, rest of the school who have the hots for the teacher and (?) the  main guy, who apparently showed some balls in this episode  now let’s see if he can keep them.

Posted by pablodsz in Uncategorized on December 31, 2010

In my defense I have to say there’s not really much to do around here, but still it kind of bums me out to not be doing anything on such a date. I can, however, execute plan B which is get drunk and watch some horrible anime.